The San Diego Museum of Art has this to say regarding Toulouse Lautrec's famous "Simpson Chain" advertisement:

THE bicycle was all the rage in Paris in the 1890s, whether for sport or leisure. 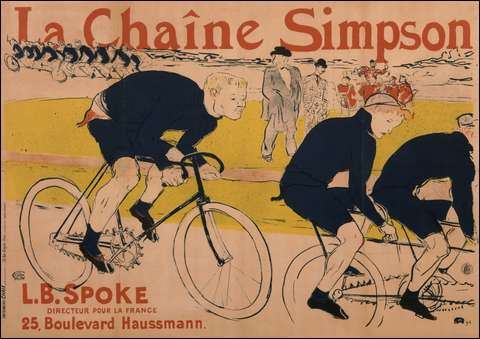 Lautrec's poster for the bicycle chains made by the Simpson company shows a race scene involving teams of riders on machines with several saddles, as well as at least one rider cycling alone; the implication is perhaps that the Simpson chain gives one man the power of many. "L.B. Spoke" was the name of the bicycle store run by the Simpson representative in France, Louis Bouglé.

This is Lautrec's second try at the commission for Bouglé, and is more successful in every way than the initial design. He not only revised the chain to an accurate scale (responding to Bouglé's objection to the first proposal) but infused the scene with the excitement of a race, complete with band playing in the infield. The first attempt depicts a training scene, while here dozens of cyclists are buzzing around the track, hunching over in keen competition, with a feeling of energy and speed that by contrast makes Jimmy Michaël in the first design appear stationary.

Lautrec added to the illusion of velocity by allowing some of the wheels to disappear into invisible spins. This second poster met with Bouglé's approval.

I remember seeing a grainy b&w photo of a beautiful young racer girl using the Simpson Chain. When I saw Lautrec's rendition, I assumed this was a non-cycling artists interpretation of the chain, but I was pleasantly surprised to see in the photo the chain really DOES look as Lautrec depicted!

Doubting Lautrec was foolish on my part, because, as I later learned, he was an avid fan of cycling (and several other sports). Lautrec was a keen observer of these events and often seen trotting up and down alongside the track to get closer views of the athletes, their equipment and the progress of the competition. It is well known that he captured and rendered most details quite accurately.

The Simpson Lever Chain riding cyclist drafting on the similarly equipped tandem is Constant Huret. The tandems are "quints", or five-seaters, which were popular as draft vehicles before the derny. The men in centerfield are William Spears Simpson and Louis "Spoke" Bouglé.

The racer in the photo was the Belgian track cyclist "Hélène Dutrieu" who later became the first woman licensed to fly an airplane in Europe.

( The photo is no longer at http://students.washington.edu/ashokm/images/champ.gif. )

Simpson Lever Chain. The tops of the triangles had cross-bars that engaged the perimeter of the rear chain wheel's flange.
...

In the meantime, technological experiments continued as manufacturers and inventors sought ways to reduce the power necessary to pedal. Such was the object of William Spears Simpson's invention of 1895, the Simpson Lever Chain. The main feature of the chain was its method of engaging the rear chain wheel. The tops of the triangles had cross bars that engaged the perimeter of the rear chain wheel's flange at a much greater distance from the wheel's axis than would an ordinary chain and chain wheel. Thus Simpson could claim that his chain provided more power through greater leverage.

In the fall of 1895, Simpson offered ten-to-one odds that riders with his chain would beat bicyclists with regular chains. Later known as the Chain Matches, these races at the Catford track in London attracted huge crowds estimated between twelve and twenty thousand in June of 1896. Simpson's team not only included the top racers - Tom Linton, Jimmy Michael, and Constant Huret - but also the Gladiator pacing team brought over from Paris. Pacers enabled a racer to ride faster by shielding him from air resistance. Although Simpson won the Chain Matches, they only proved that the Gladiator pacers were superior to their English rivals.

Through such advances, created in an atmosphere of intense competition between rival companies, the bicycle and its technologies acquired a high degree of sophistication, developments which would be crucial to the bicycle's future as it prepared for the motorized challenges to come. ...

Toulouse-Lautrec was an avid sports fan who attended weekly races at either the Vélodrome Buffalo or the Velodrome de la Seine. As he was friendly with Tristan Bernard, the sports director of both Velodromes, and with several of the racers, Toulouse-Lautrec traveled with the French team to London to witness the Chain Matches. He returned to Paris with sketches used for "La Chaine Simpson" (1896). This poster shows Huret riding behind the Gladiator pacing team, viewed from the center of the track by Bernard and Louis Bouglé (known as "Spoke"), the French agent for Simpson chains.

Also, there's this document. See diagram "THE SIMPSON CHAIN" on page 114 of the document (page 2 of the pdf). While it does NOT contain a photograph, it does have something perhaps even better - detailed technical drawings.

The Simpson Chain, of which so much was heard at the last Stanley show and so little since, has entered the cycle field in a practical way through the medium of a company by whom it is to be promoted. Whatever may be its ultimate fate and merits it has friends and opponents whose views are as fervid as they are diverse. The Cyclist condemns it, denies the genuineness of the victories it undoubtedly has recently gained in contests and roundly contests its value. On the other band, so important and disinterested an organ as The Sporting and Dramatic News is one of the ardent supporters of its claims, says of it, that "There is nothing simpler than the Simpson chain, which can be applied to any safety cycle now in use at a very moderate cost."

"It is not always that the inventor contrives to appear at the right time, indeed, oftener than not he unfortunately arrives inopportunely, and suffers thereby. Had this lever chain been introduced a score of years ago it would probably have failed to excite the faintest interest, while no critic of such things would have troubled his wise head about it. But luckily Mr. Simpson produced this latest offspring of his creative brain at the psychological moment - neither too soon nor too late. Fortunately, also, it aroused hostile criticism. It is frequently our enemies who make successes of us; and so it has proved with the now world famous inventor of the lever chain."

The principles involved in the chain are self-explanatory from the diagram which we give. If it has merits, now is an appropriate season to consider its possible future influence. If it has none, it will disappear into the limbo of forgotten novelties. If we should in the end adopt the wheel or some modification of it, we shall ere long repay our English cousins by exporting it to them in thousands. It is a sign of the times when the venerable and self-controlled "Field" joins in a chapter of lamentations with "Land and Water" over the ever-increasing favor with which American wheels are welcomed in Great Britain. The end is not yet; the time is not far distant when American manufacturers (if they are true to their interests and are not deluded into a period of cheap and nasty) will wrest from their English competitors the wheel trade of the world.

To Show or not to show has been settled, and New York will again revel in the winter festival, at which the coming wheels lure the early dollar from the ardent cyclist. The locality alone will be thanked, and the Central Palace take the place of Madison Square Garden.